The weatherperson was hinting at snow in a way that made it apparent that there wasn't actually going to be any.  I can't bear the way weather segments, like everything else on TV or in print these days, needs to vie for our attention with maybe-just-maybe drama angling that rarely proves out.
Don't we just want to know what the weather is likely to be, as opposed to being teased with not-going-to-happen hopes for snow or sunshine or whatever else the meteorologist thinks we'd prefer?  And while I'm ranting (and then I'll move on, I promise), when did the person who was the weatherman morph from a homely character I couldn't help but trust even though he was wrong at least 50% of the time into a surgically enhanced spokesmodel who leaves me doubting he or she possesses proper weather foretelling credentials?
There will eventually be a tie-in to running here, I think.
Sundays are running days and, should that offend anyone, go ahead and consider that for me running is resting and so, if nothing else, I'm honoring my Christian upbringing on a technicality.  Growing up in "the church", I've seen enough bending of the rules to not think that logging double-digit trail miles on the 7th day of the week on our modern calendar is enough to banish me to hell.
Not all on its own.
Sundays with snow?  THAT is a gift from heaven, but not one likely to happen tomorrow.  Admittedly it was only through a television screen, but I looked right into the eyes of Weather Woman and she wasn't fooling me.
The mild winter has enabled me to get in a ton of miles at varying efforts and I'm feeling really good about my current conditioning.  Tomorrow should bring more miles and build on the endurance that is my current point of focus.
BUT, I'd trade it for a day of play in the snow.
Those daydreams led to me digging through the files on my computer looking for run/snow photos and I found a short video clip from a trip west I took last April.  Down (and it's all relative when the "low" elevation on the trip was 7,000 feet) in Escalante, Utah, the temperatures were brisk and the wind was a constant.  No snow, though.  Which is why I hopped in the rental car and drove an hour further southwest to the beautiful Bryce Canyon.
Never been?  Go.
Starting from Rainbow Point (9,115 ft), I encountered the snow I was craving and it accompanied me for several miles as I descended the breathtaking Under the Rim trail.
I was nursing an Achilles strain at the time and even running downhill I could feel the effects of altitude, so the going wasn't fast.  Throw in a bit of snow and ice and scenery that made me want to stop every five seconds and that pace slowed even further.
At some point I decided to see what my point-and-shoot camera could capture on its video setting and here's what I got:
Just by getting out tomorrow, I'm going to have a blast.  The time outdoors (time NOT indoors) and shared moments with friends is blessing enough.  But, I know my mind will mull over from time to time how much more fun we could be having if there was just a bit of the white stuff to plow through.
So, cut the crap, weather folk, and bring me some winter before it's too late.
Posted by this bee's knees. at 2:03 PM 3 comments:

once you get started you can't sit down.

Staring out the window at mid-day and taking in the rare sight (this year) of snowflakes falling with conviction, I knew I needed to find a way to sneak in a run.  Never mind the fact that the temperatures hovered just above freezing and it seemed unlikely that accumulation would amount to much.

Snow was hard to come by and I was going to get out in it.
It wouldn't happen then, not with work stacked figuratively and, judging by the state of my desk, also literally to the ceiling.  I made a call to Lindsay to confirm her schedule for the rest of the day and allowed the dangling carrot of a night run to keep me hopping along happily until quitting time.
A few hours later I had several hundred acres of private and public land all to my lonesome.  The snow had continued to fall and the mercury had dipped enough to allow something close to an inch to pile up.  At slightly higher elevations, as much as two inches clung to the trees and added surprising visibility even with the nearly full moon mostly obscured by clouds.
I'd half-heartedly sent out an online invite to the "tribe" but wasn't disappointed to be on my own in the pristine conditions.  As is often the case when I run alone at night, I settled into a slightly slower than usual pace with the intent of maintaining that pace all night long.  Pulling a Lionel is what I've taken to calling that and it never fails to make me grin a stupid grin before I cringe slightly at the fact that I'm finding myself funny.

Still, the grin is genuine.
I crossed above Hammer Creek on Route 322 and hooked a quick left onto the Horseshoe Trail, pleased to find not a single set of tracks before me.  I hung another left and dug into the steep, rocky climb that peels up and away from the Horseshoe Trail.  The legs felt fresh and I soon topped out, crossed the power line and headed into the wooded state game lands on the other side.  Before long I took yet another left and followed the long descent that eventually returns to the banks of Hammer Creek and leads to the intersection with the Sharp Valley Trail, my first right turn of the run.
The snow served up a lovely, crisp lullaby underfoot and I marveled at the stillness and silence of everything else but the murmured chattering of the creek.  A far off train whistle, probably originating from the same train and tracks that called to me through the bedtime window of my childhood, just barely made itself heard above my footfalls.
Sharp Valley eventually led to the Big Timber Trail and after clambering up a rocky ascent, I found myself on the old logging road that skims Camp Mack and climbs its way back toward the Horseshoe Trail.  Before getting that high, I turned right onto the Explorer Lodge trail/road and followed it all the way back to the point where I'd first strayed from the Horseshoe Trail.
Feeling exceptionally at ease in the woods and still full of energy, I decided against returning to the car and instead began climbing up, up the Horseshoe Trail to Eagle Rock, headed east from there along the ridgeline and then came all the way back down the logging road again to the Big Timber Trail and retraced (in reverse) some of my earliest miles.
Somewhere along the way, I glanced down at my Garmin and realized that the clock had struck midnight.  At that same moment, I realized that it was now February 9th, the day that would've been my father's 60th birthday.
That hadn't crossed my mind at all, at least not consciously, before that very moment and its arrival jolted me out of my dreamy state.
I'd covered more than 10 miles by the time I arrived back at the car and had held my pace throughout, but the remaining turns and trails chosen after realizing the date had blurred and failed to register.  My head never quite settled back into its earlier peaceful state.
Instead, I pondered what it would be like to playfully give Dad a hard time about being an old man but discovered that I couldn't actually conjure up a vision of that happening.  There are photographs to remind me of how my father looked and, though I don't go out of my way to visit the mirror, it's hard not to see at least a bit of him when I cross one's path. 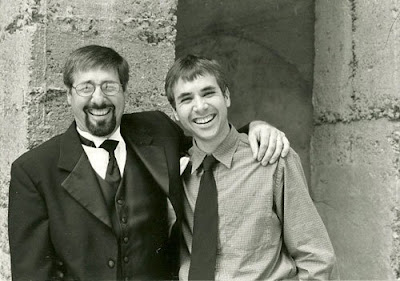 But in my mind, and I can't even begin to express how disappointing I find this, he often lurks as the 49-year old man in a coma that I visited every day for the last 5 months of his life.
You have a lot of time to look, really look, at someone when they lie prone and motionless for days, weeks and months on end.  You look as close as you should've looked all along but, sadly, you no longer have the opportunity to see anything more than the cold exterior shell and it really drives home how much life and beauty lives in gesture and movement, in the magical whatever-it-is that eyes are able to convey.
I looked too late to fully appreciate the magic.

The flicker of that magic in photographs is a poor reproduction of what is no more.  There's a reason that live shows transcend studio recordings and I'll take raw vulnerability over doctored perfection any and every day.
But, sticking with the music analogy, we don't get to see every band play live that we'd like to.  Even those acts that we were privileged enough to see perform aren't waiting in the wings for us to call them out for an encore.

Poor reproduction or not, recordings do still contain magic, however, and, if nothing else, they retain the ability to transport us back to those first listens, chill-inducing concerts or moments that became indelibly connected to specific notes or musical passages.
I love that about records.

And, I love that about photographs. 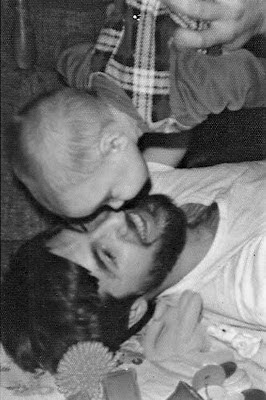