Saturday morning we (me, Lily and Piper) woke up at the quaint cabin frequented for several decades by my stepfather and his family.  We've been absorbed into that circle over the last few years and look forward to every visit.

Compared to the west, the mountains (some might scoff at that designation) of Pennsylvania appear rather wee.

Short of stature, perhaps, but not of history, not of the human or the natural variety, and I believe their sleepy demeanor is evidence of the aging process, of the march of years that have carved them to their current stooped state and whittled away at any geologic ego.

Take heed all of you tall, vain mountain ranges.  The Appalachians once stood defiantly high as well, but wind and water had their way.  And will with you in time.

On this day, recent heavy late summer rains followed by autumnal temperatures had combined to dapple the region's normal blanket of endless greens with  broad patches of yellows, oranges, reds and every hue and color variation in between. 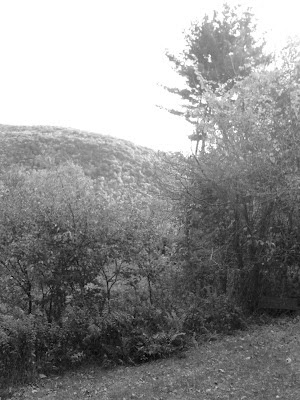 I stared lovingly and longingly from the small swath of grass behind the cabin that masquerades as yard.  I hadn't realized I was quietly speaking my thoughts aloud.

Piper and Lil locked eyes for a moment and, then, as there was no further comment, the matter was apparently decided and we headed down the path for a day in the woods. 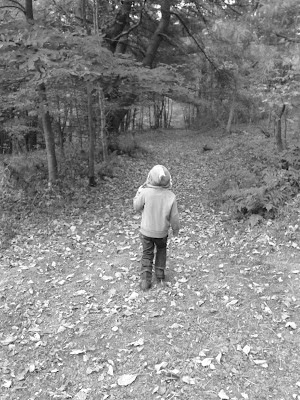 Which is exactly what I and the mountain had been discussing.
Posted by this bee's knees. at 7:39 PM 3 comments:

Back at the beginning of September, I was privileged to take part in Pretzel City's 3rd annual Labor Pains event in Reading, Pennsylvania.  A camaraderie factory, this "race" consists of a 5 mile loop and a 12 hour time limit, ensuring that participants cross paths again and again, enjoy a ridiculously well stocked home base and have opportunity to see non-running family and friends repeatedly, the latter being a rare treat at long-distance events.

The day was filled with triumphs of the physical and the emotional, birthed new friendships and strengthened many bonds. I tried repeatedly to write (type) of the day but found wanting the limp stories my feeble words reported back to me.  There was so much effort, so much emotion tied up in the day and I couldn't seem to capture any of it after the fact.

A week later I volunteered at another event celebrating its third birthday.

The Keystone Trails Association's Susquehanna Super Hike and Ultra is near and dear to my heart.  My place of work, Backcountry Edge, is one of the gold sponsors of the Super Hike and the 28.4 mile course is as close to a home field as I have known for an actual race, with the final 12-13 miles tracking north on the Conestoga Trail.  To get to the 15-mile aid station that Backcountry Edge staffs on race day, I pass the site of the head-on collision that led to the death of my father.  Two years ago I attended the event and while there got word that my grandmother was on her death bed.  Last year extreme flooding from Hurricane Irene forced the cancellation of the event and even though I got out on the course anyway, the sobering images of a nearly ruined Pequea Creek Campground and the swollen, debris-clogged Susquehanna River remain cemented gloomily in my memories.

Despite those dark shadows, witnessing friends and strangers tackling and eventually rising above the challenges presented by the up-down-up-over-and-over-again terrain that hugs the edges of the Susquehanna brings unbelievable joy.  This year was no exception and I was especially honored to be able to be there for some folks who didn't make it to the finish line but (hopefully) have life-affirming efforts to reflect upon with something nearing the pride that I felt on their behalf.  While they may have felt disappointment, at least initially, I can attest that I drew overwhelming inspiration from seeing how far they'd gone and how valiantly they'd pressed forward.

And yet again I returned to my keyboard and came up with nothing.

Not a single sentence that did any justice to what had transpired.

By the midway point of nearly every race, I'm already turning words over in my mind, setting the foundation for the flawed reports that I so enjoy churning out.  They're never perfect, never quite what I'd hoped, but at least they happen.

Not this time.  Instead, another, different DNF.

Too many other things rattling around inside my brainbox, perhaps?

My first 100-miler, slated for the second weekend of October, is looming larger everyday and everyday I feel my schedule growing less and less supportive of pre-race training.  Lil is in kindergarten (gasp!) and Piper has taken her place in preschool.  As convenient as it would be for them to get themselves awake, tidied, dressed, fed, brushed and delivered to school all on their own, they (shockingly) don't yet seem up to the task without my assistance.

Linds is back to school and clinicals, working tirelessly and meticulously, as she does, to not just get by but excel in her pursuit of a nursing degree.

Running MUST take a backseat and never for a moment do I question that.

But it does leave me shaken for next month, for a challenge that was daunting to begin with. A sinus infection swept in this week to complicate matters further and effectively drained my energy for both running and writing and laid waste to a day of work while it was at it.

I've missed the mountains since returning from TransRockies and not because I'd choose them over my family but because I'd love to have both be a part of my everyday.

Existing friends who've long lived out west haven't hesitated to offer "told you sos" and new friends, made in those very mountains, continue to send "come on backs."  And, now, a pair of best-friends-forevers have emptied the shaker of salt in these wounds by sealing the deal on a new home at the foot of Utah's glorious Wasatch Mountains and delivering the news with unapologetic neighborly invites.

Consider me haunted, hunted even, by the West.

A move that direction is not in the cards.  At least not in the nearest of futures, but it sure does sound enticing.  Especially when my wife busies herself in investigating the Salt Lake job market and school district statistics even though she's a good year-and-a-half to two years shy of escaping her current job/school position.

For now, I've got to push those temptations aside, clear these sinuses and get the mind right for 24-30 hours on my feet at the Oil Creek 100.  That race has the advantage to begin with and I'm a doomed soul if my mind's shot at the start line.

Gotta drown out the noise.  Perhaps with other noise.

"Let's not try to figure out everything at once."

That snare!  That gorgeous snare, snapping and...wait..could it be?