It's the third week of January and that means I've got a plane to catch.

The Salt Palace, Salt Lake City's charmless convention center, as it does twice each year, is again playing host to the outdoor industry as its manufacturers tout the latest and greatest assortment of the latest and greatest in backpacking, climbing, skiing, paddling, running and general outdoor adventuring gear to the retailers who will decide whether the consumer gets in on the action by placing orders to stock shelves six months from now.

There'll be plenty of cool stuff to see, that's for sure. Better be since my livelihood as a head buyer/merchandiser for an outdoor retailer depends on it.  And so I'll have yet another chance to hear the practiced spiels and give my eyes the chance to confirm or refute the validity of those spiels.

Make no mistake about it, I dig gear.  I'm genuinely interested by what "they've" thunk up next and often do believe that some brand new or at least better-than-what-came-before doodad just might make your next outing that much better than the one before.

Funny then that some of my favorite moments at OR (the industry nickname for these Outdoor Retailer trade shows) are the hours spent running in the nearby Wasatch each morning before the show, hours spent far away from the bright lights of the show floor and the rah-rah-rah of those selling and those buying (or not) what's being sold.

While running with friends this past weekend, I grinned at the telling of a whispered-down-the-lane story of someone running Western States several years ago in fresh (at the time) gear only to be passed by an old timer in jeans shorts and a recycled water jug tied to his wrist.  Romanticized and exaggerated?  Maybe, maybe not.  True or not, it's still a great reminder of how we're capable of making even the simplest of acts overly complicated.

There's plenty of stuff you COULD take running.  Plenty.  Or you could leave that stuff behind.

Just being out and running on a cold, beautiful January morning with a couple of like-minded bodies (like-bodied minds?) was fantastic.  Who was wearing what didn't matter because...we'll, because it doesn't.  I'd have parted ways with my fancy schmancy running shoes and the full-of-information reading on my GPS long before giving up the shared movement, the conversation, the time spent together on the trail.

Nothing complicated about that.

Driving home and watching the sky complete its transition from starlight to daylight, I was reminded of a passage from Walt Whitman that I couldn't fully recite on the spot but that I was quick to track down as soon as I got home:

“When I heard the learn’d astronomer;


When the proofs, the figures, were ranged in columns before me;
When I was shown the charts and the diagrams, to add, divide, and measure them;
When I, sitting, heard the astronomer, where he lectured with much applause in the
lecture-room,
How soon, unaccountable, I became tired and sick;
Till rising and gliding out, I wander’d off by myself,
In the mystical moist night-air, and from time to time,
Look’d up in perfect silence at the stars.”

As gear goes, I've got a soft spot for the "proofs, the figures...the charts and diagrams" but not as soft a spot as I do for wandering off by myself and drinking in that moist night air.

Looking forward to enjoying a little of each over the next couple of days.
Posted by this bee's knees. at 10:28 PM No comments:

"While the fates permit, live happily; life speeds on with hurried step, and with winged days the wheel of the headlong year is turned."

- the Roman philosopher Seneca the Stoic

Another round of ceremonial balls has dropped, fireworks have fired and "first kisses" have been planted with wandering eyes peeking expectantly at the shrouded days ahead, all signals of the rearrival of the time for life altering affirmations.

When and why it was decided that the first of the year is when this should occur, I often wonder.

And, since we're bothering to pose questions, has any New Years resolution ever seen the month of May?  If so, wasn't it far more than that to begin with and, as such, due just action prior to the prompting of a new calendar being tacked to the wall?

I'll say this (try and stop me), whatever the impetus, change for the better is better than NOT changing and doing so (not doing so?) for the worse.  I'm all for finding what it is that drives you and, well, letting it drive you.

One need not be a runner (or about to be one) to be someone who makes resolutions, but it does seem that the two classifications are often one and the same.

This will be the year to run faster, to get stronger.  A year to go farther.  Run smarter.

It's time to slim down.  To bulk up.  To lose weight, lift weights.  To amass muscle.

A time to diet.  To change one's diet.  To eat less red meat.  Eat no meat.  Load carbs, avoid carbs, be free of fat, of cholesterol, of gluten.  To be free.

This year speed work will be incorporated.  More hills will be repeated.  Intervals will happen.  Fartleks?  Laps at the track?  Negative splits?  Back-to-backs?  Check.

Gonna finally run a 5K, a half, a full, an ultra, a whatever comes after that.  Gotta up the mileage.  Road miles, trail miles, mixed miles.  Miles and miles and miles.

Miles that lead to PRs, to age group awards, to podiums, perhaps.

In keeping with our bee-buzzing culture, all this game planning over a fresh clean calendar demands that we fill all that blank space.  There it sits...blankly.  If the calendar isn't filled, what's the point of all these new resolutions?  Fill it. 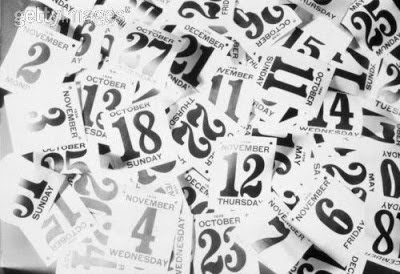 Well, honestly, I've got nothing.

Or maybe I'm foolish enough to think I've got everything.  Or something close to it.

I'm no different than any other ultrarunner.  I already had my calendar and had even penciled in a few preliminary races.  With others that I'd like to do in mind, if not on paper.  Races that I  still may do some day.

It really doesn't matter to me.  Not as much as I sense others think it should. But motivation is mine to find just as it is for them. I have and always will root for others to meet their goals whether those goals are similar or dissimilar to my own.

But, me, I picked up that pencil, spun it around and erased the few entries that inhabited given spaces on the calendar.  After "unfilling" my calendar, I wrote three letters in the box reserved for January 1st.

I wrote it again on the 2nd, the 3rd and each day thereafter in January before flipping the page and the next page and the next until there were no more open dates.  Those races to which I'd already committed were added back but only in small print at the very bottom of each of their corresponding compartments.

No, I don't have any explosive intentions for ANY day much less the entire year.  I too couldn't live with an empty calendar but I'm convinced that the most important goals for me, personally, have nothing to do with speed, with specific distances or any particular badge of honor event.

Instead of always prepping for upcoming challenges, training for the next race, being excited for something that WILL happen, I simply want to continue to embrace every moment WHILE it is happening.  Racing can and will be part of those many moments but, in no way, is it, has it been or ever will it be the sole definer of who I am or how fulfilling life is.

And, in the end, the clock's report just doesn't matter.  Not to me.

I think I may have thought it did.  Until I really stopped to think about it.  And then I realized that it doesn't and that I was wrong.

It really doesn't matter at all.

The most rewarding of race days, for me, have had nothing to do with the final time.  The races that really demanded endurance, the overcoming of obstacles, physical or mental, stand out even though the finish lines weren't reached until many, many other runners had crossed there first.  Days of failure, from a competitive standpoint, are anything but failings if bonds were formed and strengthened, if laughter was shared.

Recollections of the small handful of races that resulted in finishes closer to the front of the pack are faint.  In fact, while running alone the other morning and beginning to put these thoughts together I recognized fondly that I can't actually recall what my fastest times are at any given distance.  And I hope that doesn't change even if my efficiency or performance should improve.  It's just not of importance to me and I can't and won't try and convince myself otherwise.

I'm not abandoning racing or attempting to rain on anyone else's competitive parade, but the closer I pay attention to what motivates and makes me feel alive, the more inspired I am by the things that often go overlooked, that take place without the fanfare of a starting gun or a bag full of swag.  Adventure lurks everywhere and quiet bolsters the spirit as much as cheers.  Solitude is so precious, so miraculous.  It balances and in turn makes me that much more appreciative of the opportunities to spend time with friends, encouraging and being encouraged.  THAT is what keeps "racing" interesting not the competition to see who's done what and how.

At pissing contests, I'd just as soon be the guy with the empty bladder.

Call it my resolution or, as I prefer, a philosophy that I've slowly carved out and to which I have fully subscribed.  I will continue to seek and find the adventure in the everyday.  To relish quiet whenever and wherever it can be found.  And all the while to cherish and nurture friendships.

Every day.  Every TODAY.