I was a sports crazed kid.

Even without the Internet, SportsCenter, or cable TV, the last 4-5 minutes of local news broadcasts, weekend telecasts, and magazines kept 1970's/early 80's-me up-to-date (ish) on my heroes and their athletic feats in the NFL (my first love), college and professional basketball (my second and truest sport love), and major league baseball.  ABC's Wide World of Sports clued me in on some of the "lesser" sports and every other year one of the seasonal Olympics would bring a parade of competition that seemed to go otherwise unmentioned during the off years and in-betweens.

You'd have been hard pressed, perhaps incapable, of convincing me that these exploits weren't of life and death importance or that the outcome of any given contest simply didn't matter all that much in the grand scheme of things.  My not-the-least-bit-interested in sports parents didn't bother trying.  I would figure it out on my own in time and, for the most part, I've done just that.

Much of the pomp and fanfare of professional sports has diminished my enthusiasm over the years. That and just getting older, I'd guess. As much as I continue to enjoy watching people strive and compete and am enthused by any game played at a high level between people or teams of similar ability and degrees of competitiveness, the peripherals often keep me from tuning in or contribute to me soon tuning out.

Still, I do find myself fascinated by compelling tales of athletes, teams, and obstacles overcome. It's the humanity beneath the surface, the not-so-glossy below the gloss that pulls me in, and that I find to be the most beautiful and worthy of celebrating.

Ultimately, I love a good story and, having grown up on sports, a good athletic story remains as likely as any to grab and hold my attention.

Not surprisingly, ESPN's award-winning 30 for 30 series of sports documentaries were made to my order.  Originally launched as an anniversary celebration of films by 30 different directors profiling some of the top moments or stories in sports history that occurred during the television network's first 30 years, the series was eventually expanded after audiences responded enthusiastically and several episodes garnered commercial and artistic praise.

I watched enthralled as the series ran a wide gamut from explorations of the rise and eventual demise of the USFL, a much-larger-than-life profile of Bo Jackson, a behind-the-scenes look at the 2004 Red Sox and their improbable rally against the Yankees in that year's American League Championship Series on their way to a world championship the franchise seemed doomed to never claim, and an innovative recreation of the drowning out of the full slate of sports that occurred on the day that the pursuit of OJ Simpson and AC Cowlings on the LA freeway took over television sets everywhere.

There were other stories of events and athletes I hadn't known and sports that rarely or barely hit my radar. The 16th Man broached the social and political implications of Nelson Mandela supporting the national rugby team in post-apartheid South Africa and Into the Wind chronicled Terry Fox's attempt in 1980 to run the entire length of Canada to raise awareness and money for cancer research after having had one of his leg's amputated above the knee because of osteogenic sarcoma.

Watching Hawaiian: The Legend of Eddie Aikau, I learned of the humble native surfer who served as the first lifeguard in the famed Waimea Bay, was responsible for saving literally hundreds of lives on his watch, and sacrificed his own life trying to paddle back on his surfboard some 12 miles to the closest island of Lanai for help after the Hōkūleʻa, a traditional boat on which he was a crew member and that was attempting to retrace the ancient route believed to have first brought Tahitians to Hawaii, capsized in a storm and was drifting farther and farther off of its course and growing less likely to be rescued.

But perhaps I too am getting way off course.

The point I intended to get to is that real life matters a whole lot more than the current collegiate sports rankings, which athlete hoisted what trophy, and the batting average of the latest baseball wunderkind.

Another part of the point I also mean to make is that within organized sports and certainly from individuals engaged in athletic endeavors do dwell valid moments of inspiration and, ultimately, drawing strength and motivation wherever you find it shouldn't be dismissed as being banal or cliche.  Hype aside, applicable metaphor does exist.

Sometimes sports really can inform real life and real life most certainly informs sports or at least the persons engaged in them can offer glimpses into how determination and persistence pay off.

When the humanity of sport and life collide or overlap, I'm again the same wide-eyed fan I was at 6 years old.

Midway through the Bear 100 a few weeks ago, after a long night of cold and wet and lightning and hail, after falling repeatedly in the beyond slippery clay-on-a-potters-wheel terrain, the protective cover of a canvas tent, the relative comfort of a folding chair, and the warmth of a campfire made me question getting back on my feet for hours and hours and miles and miles of more punishment. 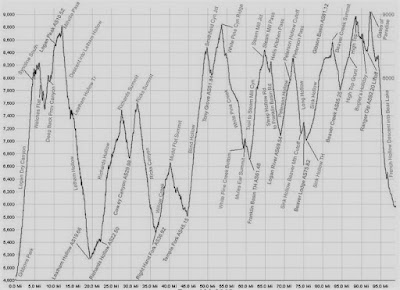 Pondering that question whisked me away to a more tropical locale.

In April of 2017, Piper, Lily, Lindsay, and I found ourselves boarding a plane for a week of vacation gifted to us by the amazing people at Make-a-Wish.  Lily had undergone brain surgery to combat a cancerous tumor the November prior and the trip had been something she and her family could focus on and look forward to instead of just worrying over how surgery would go and what recovery might entail.  When Lily had been asked to name her wish, she unhesitatingly said she wanted to swim with dolphins and Make-a-Wish set everything in motion.

We were informed that there were two potential places in the US where the wish could come true. We'd already been to Florida, so we chose location number two. 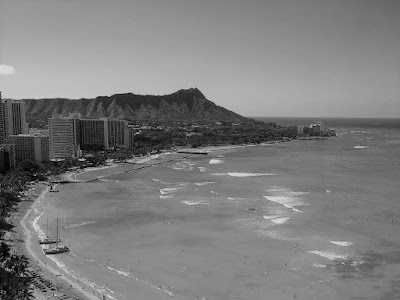 In addition to swimming with dolphins, in Hawaii we'd have the chance to visit Pearl Harbor, snorkel in Hanauma Bay, and take part in several other special activities.  On our first full day on the island, we were able to attend a luau.  It was only upon arrival that we were informed that there were a number of other children there because of Make-a-Wish and at a certain point in the evening all of the kids would be brought on stage and honored.

My Lily is very much a creature of habit and so long as she's given fair warning and has time to process, even if what she's up against is daunting, she's quite adept at steeling her will and seeing things through.  Blindside her or catch her unawares, she struggles. Like many of us.

She'd just turned 10 at the time and was still finding her way in terms of "owning" her cancer and accepting having attention thrust upon her for that reason.  She'd get there in time and has become an active ambassador for childhood cancer awareness, but she was very much in the infancy of that journey then.

Frankly, she didn't want to stand in front of the "room" and be recognized as a sick kid. Had we forewarned her, she would likely have been fine, but the news being broken to her just minutes beforehand and without an opportunity to refuse or consider had her on her heels.

We did what we could to calm her nerves and did our best to enjoy the festivities together as a family. The food was exotic and delicious and the dancing and storytelling were mesmerizing.  Still, I squirmed throughout the meal and performances knowing what was coming and realizing that I didn't even have an idea how the logistics were supposed to work.

Before I understood what was even happening, a large man in a mix of modern and traditional garb appeared at our table and gestured at Lily to come with him to the stage.  She looked uncertain and nervously glanced first her mother's direction and then mine.  As I began to get to my feet to intercede, Lily motioned at the man to lean down and as he did he turned his ear toward her.  She said something to him that caused him to pull back with a surprised but bemused look on his face.  As Lil rose to her feet, the man extended his arm and took her hand.  Together, they made their way toward the stage. Lily didn't even look back our way.

Though her nervousness was quite obvious to her parents, Lily stood bravely alongside the other children, smiled, and politely accepted the kind gifts extended to her by the chief who led the ceremony and bestowed health and safekeeping to all the children on stage.  Minutes later, Lil returned to our table with a shrug of shy relief but without a word. 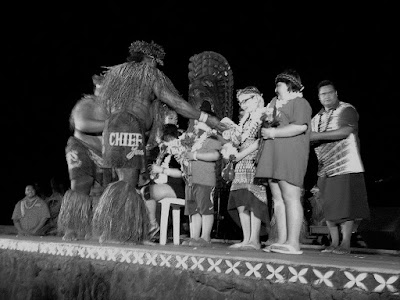 Soon after, I was approached by the man who'd escorted Lily to the stage. He gave me the shaka sign, grinned broadly, and then shared with me what my daughter had said to him.

You see, after Eddie Aikau made that legendary attempt to swim back to Hawaii for help, his astounding courage wove its way into popular culture on the islands. When the waves and conditions at a surf contest named in his honor were dangerous enough to make organizers question whether or not to hold the event, legendary-in-his-own-right surfer Mark Foo simply stated "Eddie would go" and the phrase became synonymous with mustering courage and doing what needed to be done.
Weeks or perhaps even months before, I'd told Eddie's story to Lily and Piper without ever expecting it to stick.

And the legacy of that waterman's selfless effort in the face of adversity and truly against all realistic odds inspired strength in a little girl more than 40 years later.